If you know someone over forty, ask them if they remember books like The Illustrated Bible  sitting on end tables in the dentist’s waiting room. Everyone used to display these, and I remember looking through their colorful renderings of 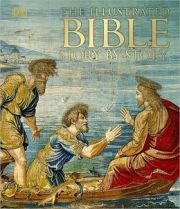 important Bible persons and events. By the way, does the picture of two elderly pale European men in a tiny boat with (obviously) cropbearded Jesus strike you as an accurate rendering of the episode in Luke 5:1-11? If you think the cover is a stretch, click the link and take a look at Leonardo’s Annunciation on page three of the preview! Is that your idea of the angel Gabriel? Was Mary really that “mature,” and where did she get the marble table? (Thank you, Verrocchio!)

We taught our kids from the classic Egermeier’s Bible Story Book, because we heard of its legendary accuracy from the (very serious!) homeschool crowd. Published in the 1920s, it has survived the test of time and proven itself a classic. Yet it has been criticized on grounds of inaccuracy. One reviewer wrote “there are facts presented that are flat-out false,” while another notes that it, “softens or skips the less age-appropriate elements like incest and promiscuity” (see Amazon reviews). Our kids, and thousands of others, have quite profitably been taught Bible stories from this factually deficient book!

The point is that we can, and we do look past a lot of factual errors and “reading between the lines” in art and stories based on the Bible, appreciating their value and utility despite their fallibility and inevitably-culture-bound aesthetic. Viewers of The Bible miniseries on History will have to grant the same latitude if they want to enjoy its unique paraphrasing of the Biblical story.

I watched the series premier as something of a skeptic, expecting revisionist history, political correctness and more stale Jesus Seminar rhetoric about how we really can’t take the biblical canon as a historically reliable sacred text. To my delight, I noticed in the opening scene where Noah rehearses the prologue of (what would later be) Genesis to his family, there was no attempt to qualify, distance, or deconstruct. The Noah character took the creation story as authoritative revelation, passed on orally from generation to generation. As the docudrama unfolded, it stayed true to the aim of rendering a familiar body of stories and themes to an audience for whom they might be unfamiliar.

That last assertion is my reason for giving the series premier a tentative three stars out of five. Let me enumerate some the star-earning points:

For these reasons, and probably a few more, I feel fairly positive about watching the rest of the series as it unfolds over the next several weeks. However, I have to acknowledge some limitations and concerns:

I do think we need to be discerning and informed whenever we teach, tell, act, sing, or allude to the inspired, infallible, inerrant text of Scripture. Especially those who teach. The Bible is not designed as a teaching series–though there are lots of revenue-generating support materials for teachers on the website–but, like Wangerin’s The Book of God, it admits (in the prologue) it is not a substitute for the Bible itself.

As for how adequate this docudrama proves to be at entertaining and informing audiences to help them become more interested in the greatest story ever written, that story remains to be told.